My PSC shay has no more parts to install! Today marks the day, all the parts in the kit have been assembled. A major victory to celebrate. Despite horribly incomplete instructions and some really poor castings (PSC is much, much better today. Today's castings are much higher quality) I managed to get it all together and running well. 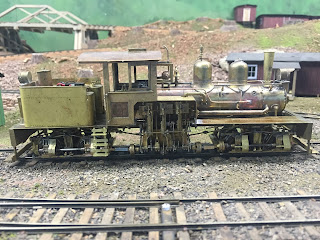 A few things I would like to do yet:
1. Install sander rod and leaver to sand dome
2. Install wire rope to bell and whistle
3. Install some kind of tender coal board and coal cover for the motor
4. Install the bulbs and wiring for the headlights
5. Paint, letter and weather the loco.

Here is my version of the outside braced Cairo and Kanawha Railway boxcar.  It is a Wisemann Models On3 Peach Bottom box car, as drawn by Edmund Collins. I modified the ladder and brake detail. Notice the lack of brakes on one side of the car. Looks a little funny to me, but that's what they did, all the way to 1929. 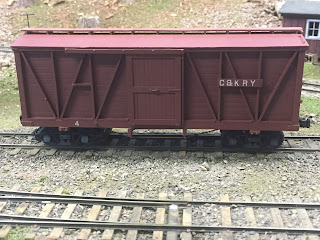 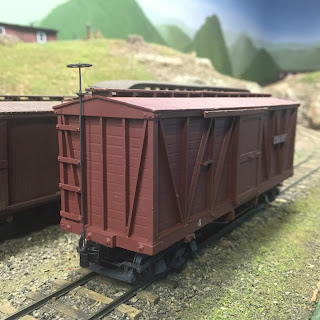 The car just needs a little weathering, otherwise, its done. I don't know if I'll ever decide to scratch build a more exact model of the car. I'm not sure what the car number was. Pictures clearly show the car and locations of the lettering but not the number. We know that box car 5 and 7 were different and numbers 8-12 were flat cars, so, I'm guessing its no. 4.

I have been trying to modify my Kadee couplers to eliminate the bobbing caused by too much slack in the coupler system. I have been using the idea posted here: S-Coupler Head and finding it works fairly well. The couples still center but not quite as well as unmodified. I can live with it since the bobbing caused by Kadee's is so very, very annoying...... I could use link and pin couplers, that would be prototypical but I have no desire to operate with link and pins. Too short a fuse.
Posted by mushva at 6:41 PM No comments:

Shay No.1 was my first Bachmann locomotive. It was originally On30, and ran for a short time on the Arroyo Mine RR. I converted it to On3 a long while back, added the new cab, headlight, bell and removed the generator. 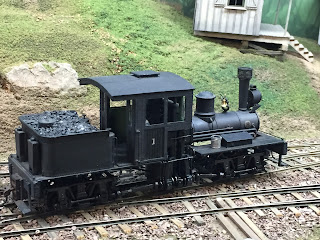 The motor has been acting up over the last year or so. Sometimes works, sometimes doesn't. Odd behavior in between. So, I pulled the motor and switched it out with another I had on hand. I was worried that the decoder may be bad, but it seems to be working with the motor replacement. Noticed that three of the gears had cracked and that they were affecting the engine's performance. One gear had been cracked but had not seemed to affect the performance prior. So, two Northwest Shortline gear replacements on the front truck and a plastic Bachmann spare on the rear. Off she goes. Still needs a new cab window and the headlight glued down. Wondering if I should out gear covers on her and a cover over those cylinders............
Posted by mushva at 7:05 PM No comments: