Managed to get the gondola (flat car with sides) done this weekend. I should have the coal load ready for it in a few days. The WW&F shipped a good bit of coal over the line as inbound traffic. There's at least one good shot in the later days of the line of folks shoveling coal from a gon into a small Ford truck. I imagine that coal was also used at the cannery and tannery. 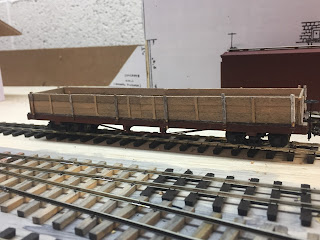 I also managed to get a Tsunami decoder into the Sandy River No.6 (Could be WW&F No's 2,3,8, or 9). What a pain! I re-motored the engine and then added the Tsunami. Short, short, short everywhere! The truck mount, when screwed in all the way shorts on on the frame- I added a small 0.010 sheet styrene, then had to add electrical tape to cover another screw head holding the original insulation material to the frame (shorts on that too), then the pilot needed to have electrical tape added. Then the rear truck fell apart while running on the line! I eventually found the loose screw but turned out some soldering was required. Using some resistance tweasers, I managed to send the part into the basement oblivion (insert inappropriate vocabulary here). Luckily, for some strange reason, I just happen to have some 0.40 brass around and made a duplicate part. Loco ran fine till I put the boiler cab assembly back on, then a mystery short somewhere, moving more wires around, finally it runs! I'm now remembering what a real pain in the rear DCC is!

Both engines have "stay alive" capacitors, which are needed due to poor electrical pick up (one side on the drivers and one side on the rear truck for both!). I will eventually add more, maybe when it comes time to paint them. I need a break from installing decoders, YUCK! All those tiny wires are a PAIN when you try to fit them into a small space. I have no idea how the Sn2 guys do it. 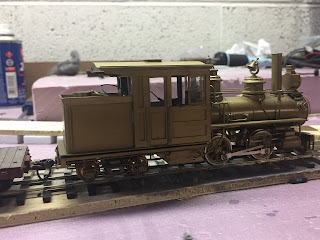 I managed to find one spot where additional contact wiring was required. The module seems to run well at this point. No. 7 is running rather well. I managed to cut, drill and tap some Kadee couplers for the front of both No. 6 and No. 7., which really increases their utility. 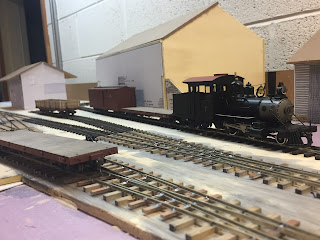 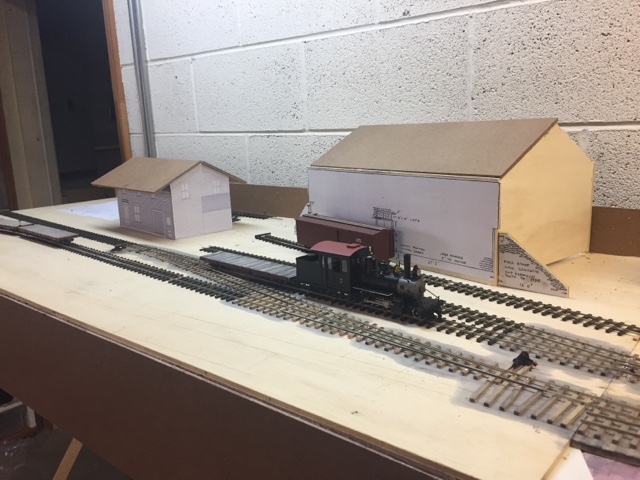 This weekend I managed to get 90% of the track work on the Albion module. Only the side track to Tiltons potato houseand the one to the turntable were not completed. As of today, only the turntable lead is missing. After much fussing, I managed to get a decoder in No.7. No headlight yet. A nice model but poor rear truck design. I actually did some switching moves with the flat cars and a box car. Track work and switches work well. I did have to widen the turnout guard rails as they wed too tight for the Carr Works No. 7, they were fine for the cars and the Custom Brass 0-4-4. More To come.....
Posted by mushva at 7:47 PM No comments: 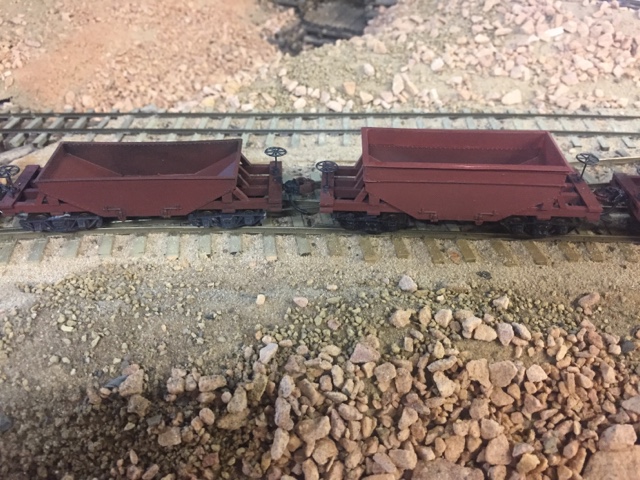 Purchased some plastic Hon3 West Side trucks and widened them to On30. The three small Gilpin ore cars are almost done. I added a small amount of weight and need to letter, weather and tuck up some paint, then all done! Well, actually, it looks like I need to add decks to them. One more thing! Must have added the decks during the rebuild.
Posted by mushva at 7:39 PM No comments: